LINKS to the Past: A Kosher Hot Dog Odyssey 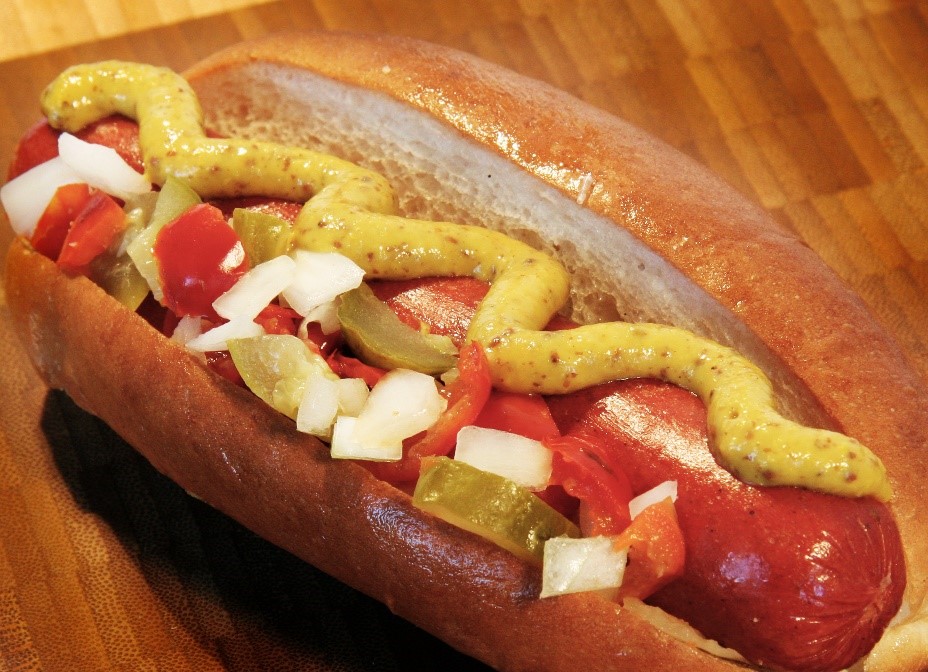 Call out ‘HOT DOGS!’ at any camp or colony, and prepare for a rush of running feet, and a clatter of plastic plates and forks. There is magic in those hot dogs, painted on the olfactory backdrop of pine trees and swimming pools.

But while kosher hot dogs take center stage in our summertime circles, their culinary ancestors didn’t start out quite-so-kosher. A frank look at hot dog history shows they’ve come a long way to get to OU-r picnic tables. Let us return to the dawn of hot dog history, going from its most-kosher moments—to its wurst.

In their ancient roots, hot dogs are as Jewish as another tribal favorite: pizza. (But let’s not mention dairy, here.) In truth, hot dogs are just one example of that most-unJewish-sounding fare, ‘sausage.’

Sausage comes from the Latin for salt, which means “a mixture of chopped meat and salt stuffed into an edible tube,” says food historian Harold McGee.  This salt plays two important roles here: it zaps any errant microbes that might find their way into these sausages, and, more deliciously, it helps bond together the little red and white particles you might spot, when looking through their casing.

For those interested—the salt dissolves the myosin, a “fiber filament protein,” so that it can migrate out of the muscle fibers and onto the meat surfaces, where it acts as a kind of glue—to bind together the pieces of meat and fat. That fat takes up a full one-third of the mixture.

This blend is summarily stuffed into an edible container—traditionally (and for this I beg your pardon,) the intestine: the animal’s, not the reader’s.

The sum of these parts? A rich, homogenous mixture surrounding by an easy-to-negotiate, edible wrapper. Here mankind discovers the sushi!

The uncooked sausages one spies across the aisle in Shop Rite are speckled, foreign-looking items that seem to announce: ‘We’re not kosher.’ But hot dogs, and their close cousin, baloney, are of a type called “emulsified sausages,” McGee says, with a “very fine-textured, homogeneous, tender interior.”

THE MEAT OF THE MATTER

The meat components of hot dogs are the subject of much dispute, and of some cynical comments. True, ‘meat by-products’ could be used—but these must be declared plainly on the package.

Yet a more-discerning hot dog manufacturer might take the high road—and stick to just-plain BEEF.

One such producer (which can only be spelled with an O and a U) is Mr. Seth Leavitt, proprietor of A&H Kosher Deli Provisions, in Hillside, NJ—not too far a drive, for a good hot dog.

We grilled Leavitt for the inside scoop, on what really goes into his hot dogs.

‘We then mix them together to achieve just the right ratio of lean-to-fat, for maximum juiciness and flavor,” Leavitt says.

But a plain meat-and-fat blend would not satisfy the palate of a discerning American. The characteristic hot-dog flavor is informed by other ingredients. These typically include salt, pepper, garlic, coriander and mustard. (This latter ingredient will reappear, most auspiciously, at a later time…)

Most hot dogs are smoked—during production (if not at the actual barbecue.) But often, nowadays, Leavitt and others use smoke flavoring, a condensate of smoke particles from woods such as maple and hickory. This is a safer alternative to actual smoking—and perhaps healthier for plant employees. Let’s hope they’ll one day bottle that outdoor woods-and-pool smell….

All of this health business (which grates the teeth of any self-respecting hot-dog connoisseur) is part of an ongoing effort of manufacturers—“to lure the growing legion of wellness-oriented shoppers.” So proclaims none other than The 2019 Sausage Report, in the July issue of The National Provisioner. “Retailers are marketing additional products that carry a wider scope of health claims, ranging from natural and organic, to being developed without antibiotics and growth hormones,” the report claims. In our circles, as well, an increased demand for organic kosher meat and chicken, and organic kosher hot dogs, has been noted.

Leavitt as well makes use of these natural ingredients, especially in his ‘uncured’ hot dog line: “Cultured celery powder, and cherry powder, are the ‘natural nitrates’ that we use,” Leavitt says.

Celery powder is a ground, dried concentrate that has inherent nitrate and can substitute for sodium nitrite. Cherry powder, as well, speeds up the curing process and adds color, thanks to the chemical action of its natural ascorbic acid.

But, to the average hot dog aficionado, all this talk about health is missing the point! Let us get back to our hot-dog story—and move forward in the hot-dog making process.

The above ingredients, along water and ice, are combined in a massive mixer-grinder, until they form a smooth batter, McGee explains. The trim “is evenly dispersed in small droplets, which are surrounded and stabilized by fragments of the muscle cells and by salt-dissolved muscle proteins.”

The temperature during blending is a deal-breaker. If it goes above 70 F, “the emulsion will become unstable.” Enter: the iceman.

“Science plays a huge role in the processing of hot dogs,” Leavitt says. “We need that ice, to keep the temperature cold enough—so that the protein encapsulates the trim into one delicious, homogenous filling,” Leavitt explains.

The mixture is then moved, with the help of a screw-like device called an auger, into a machine known as ‘the emulsifier,’ Leavitt described. Afterwards, the emulsion sets for at least 24 hours, prior to casing. “We can’t rush this step,” Leavitt says, “as it allows all the ingredients to amalgam, resulting in the enhancement of flavor from our proprietary spice blend.”

Once the emulsion has set, it is then deposited into the stuffer machine.  A large hopper there forces the emulsion into another device, called ‘the linker.’ There it is extruded into a cellulose casing, and punctuated into its characteristic links. (We will resist the temptation to insert a link here!)

Some hot dogs use natural, edible casings which have a characteristic snap when you bite down on them. Collagen casings, for example, made of beef proteins, are an edible alternative to the now-verboten sheep intestine.

But the A&H link before us is skinless: the casing is cellulose (plastic,) meant to be peeled off the hot dog and discarded before packaging.

Leavitt describes how close to 500 lbs. of these links are suspended on two large, stainless-steel “trees,” and wheeled into a walk-in oven, at which they are heat-smoked to an internal temperature of 165 F. The heat will coagulate the rich batter into a one solid mass, from which the casing can later be removed.

After a cooling shower, high-velocity blowers calm the dogs down further, to a nippy 35 F. They are then stripped of their cellulose casings, dispensed into totes, and summarily packed and ‘fridged. Leavitt takes pride in his new, state-of-the-art ‘Multivac’ packing machine, which can package some 1000 lbs. of salami, (a close cousin,) in just 20 minutes. 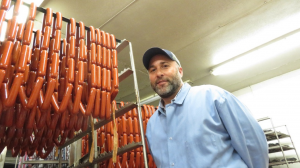 This writer toured the packaging line, along with the coveted Multivac—and was awarded several packaged samples for later (ahem) product testing and kashrus verification…

Leavitt has much to be proud of; the OU symbol on his product is the relish on top of the story of this American delicacy.

As a hot-dog consumer, you may have noticed its distinct resemblance to that long, thin, waddling dog named ‘dachshund,’ pronounced sort of like ‘Datsun.’

If so, you are hundreds of years too late. Hot dog historians (if you can bear that expression) claim that in the late 17thcentury, a butcher named Johann Georghehner (which is entirely unpronounceable) promoted his new ‘little-dog’ sausage in the town of Frankfurt-am-Main, in Germany. Others say this city developed its specialty years earlier, in the late fifteenth century. Enter: The Frankfurter. Still, with much chagrin and Teutonic bluster, Austrians “point to the term ‘wiener,’ to prove their claim as the birthplace of the hot dog,” the Hot Dog Council reports.

Somehow this delicacy migrated west to the New World—no doubt in the steamer trunks of all those immigrants. In 1871, Charles Feltman, a German butcher, must have jumped ship right onto Coney Island, the entertainment mecca of that day. Feltman opened the very first Coney Island hot dog stand. In his first year of business, he sold over 3600 hot dogs on a bun, reports say.   By 1900, Feltman scaled up, to employ 1200 workers at his ‘Feltman’s German Gardens,’ selling his trademark ‘Coney Island Red Hots.’

One of those employees further jumped ship, to open a competing hot-dog business, in 1916. While Feltman charged a dime for each hot dog, his competitor charged a nickel. This competing stand soon became a Coney Island icon, and later a nationwide firm, going public years later.

At Leavitt’s plant, full-time mashgiach Rabbi Shmuel Rubin keeps a watchful eye on all incoming meats, materials and processes. This is of great comfort to Leavitt, an Orthodox Jew, who lives with his family in nearby Englewood, NJ. Leavitt had worked for a glatt-kosher meat purveyor for some time, and set off on his own, to approach longtime kosher hot-dog manufacturer A&H, founded in 1954 by Oscar Abeles and his nephew, Leopold Heymann.

“Oscar apprenticed to a sausage maker as a youth, in Germany,”’ says Leavitt. “He left behind his secret formula: good meat, good spices, and preservatives, to extend shelf life.”

Still located at his small plant in the Bronx, the surviving Lee Heymann had no heirs willing to take on the storied establishment. Further, Lee wanted A&H, the product of years of hard work, to remain a family-type business with a personal touch and a culture of quality. He was pleased to sell the business to hard-working Seth Leavitt and partner, in 1997.

Leavitt was about 25 years old at the time and eager to grow the business. After two years in the Bronx, the company moved into a co-packing plant elsewhere. After five years of this, Leavitt found the Hillside, NJ, facility, in 2006. Several years later, Seth made the acquaintance of the Yehiam HaGolan kibbutz in the Galilee, Israel, the producers of the glatt-kosher Hod Golan brand of poultry products. Leavitt signed a deal to partner with them, and benefit from their expertise, technical savvy, financing, and equipment. “I enjoy working together with the kibbutz,” Leavitt says. “They have a team culture—and are great partners.”

Leavitt’s product appears across the country, both in independent, kosher stores, and in nationwide chains such as Shop-Rite, Stop & Shop, Albertson’s, Publix, RD, BJ’s and that new heimische mecca, Costco.

A&H glatt kosher hot dogs also appear at the kosher grills at Citifield, at the Legends Lounge in Yankee stadium, as well as Metlife Stadium. 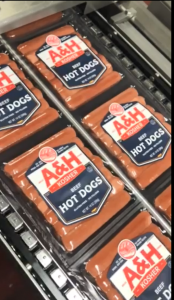 “It’s very easy to make a bad hot dog,” Leavitt concludes, “but it’s hard to make a good hot dog.” Indeed, Leavitt’s ongoing commitment to kosher and quality may one day have all of America—eating KOSHER hot dogs.